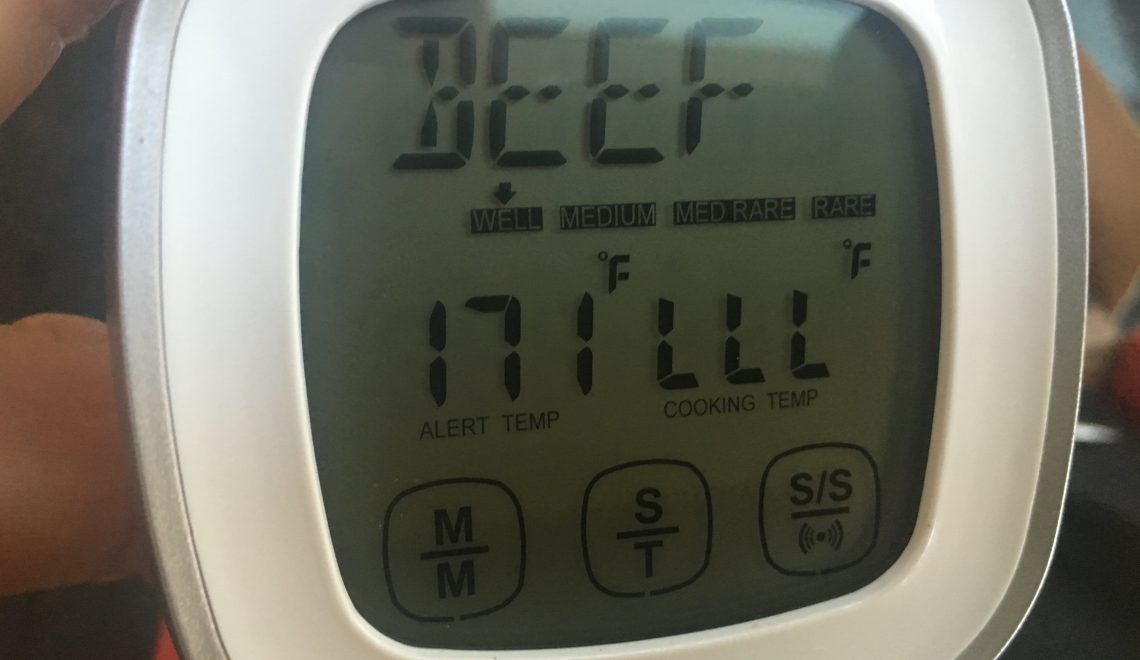 Overcooked meat is awful. Downright awful. I admit, I have a temp probe thermometer that I can get out and use to test the doneness of my meat, but I eyeball it.  It’s usually correct or within a margin of error for an amateur chef like myself.  But sometimes… well, things overcook.  ESPECIALLY in the smoker.  I admit it, I take the “long and slow” sometimes too long.  That’s why I was extremely excited to get one of these touchscreen bbq grill and smoker (also for oven) meat thermometers at a discount in exchange for an honest and unbiased review.  I knew I needed one anyhow.

So, today’s the day I’m testing it.  In the smoker.  Let’s talk about the thermometer for a second – there’s 2 probes, one for instant read (casual checking) and one for cooking with the probe in it.  This is the one I’m going to use most I can tell.  The cord is temperature safe and can go right in the grill, smoker or oven.  (but the manual states that it cannot go into a closed oven… I’ll have to dig more into that because I typically don’t cook with the door open!!!  I’m thinking it’s just because of the high heats over 450 degrees, but I’ll be testing that at some point and if I find this product doesn’t perform, I’ll stop back and update this review.

The touchscreen is cool  – no buttons to get “gummed up” if you’re pressing them with sauce on your hands.  VERY cool idea.  You can change between meat types (chicken, pork, beef, etc.) and you can select between doneness – medium rare, rare, well,…  For you international people you can select Fahrenheit or Celsius.  Just plug in the probe, put the probe in the meat, and turn it on and go!  It even comes with the required (2) AAA batteries (THANK YOU!!!!) and a cool carrying pouch to put it all in when you’re done.  Looks as straight forward as can be.  I tested the thermometer against my instant read probe and yes – it’s accurate too.

So far, nothing to complain about!!!  It has a timer (that’s only 99 minutes…. c’mon guys, if you’re doing meat in a smoker you need HOURS not 99 minutes!!!! so that function is useless)  and an audible beep alarm for when the meat gets to the desired temp.  The one thing I will say is that the temps are set – max temp alarm is at 171 degrees F – which is low for a brisket — a brisket should have an internal temperature of 190, or so.  But you can get to 171, double wrap it in aluminum foil and return it tot he smoker and keep your eye on it until it hits that magic 190 mark.

Overall, for the money this is a handy little Digital BBQ Meat Thermometer!!! 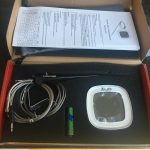 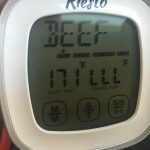 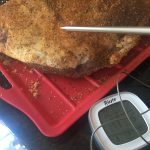 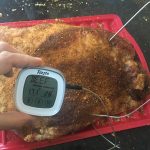 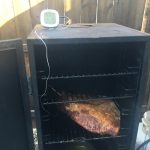 See it at Amazon.com